You are here: Home / Food / 18 Best Foods for Your Doomsday Bunker
This post may contain affiliate links.* As an Amazon Associate I earn from qualifying purchases. Click here to read our affiliate policy.

Every year, the world seems to get a little crazier and a little more dangerous. Maybe that’s why rich people are buying doomsday bunkers and stocking them with survival food.

If you have a doomsday bunker of your own, it’s important to stock it with foods that are not only nutritious and tasty, but also long-lasting and easy to store. In addition, they need to be foods that can be eaten right out of the package or at least require minimal preparation.

With all that in mind, what are the best foods for your doomsday bunker? Read on to find out!

Water is essential for survival, and bottled water gives you the assurance of clean water that won’t expire quickly. Look for bottles with long shelf lives so you can stock up on enough water to last a very long time.

Ration bars are a great way to get a lot of nutrition in one small package. These bars are usually packed with protein and other nutrients that will help keep you energized throughout the day. You can buy ration bars online or make your own.

MRE stands for Meals Ready-to-Eat, and they come with everything you need for a meal. They also have an incredibly long shelf life; some varieties can stay good for up to five years! This makes them perfect for stocking up ahead of time and having on hand in case something unexpected happens.

Plus, they generally don’t require any cooking or preparation; all you need is some water to rehydrate them!

Coffee is essential for most people’s morning routine, and when it comes to stockpiling food for a doomsday bunker, coffee should be high on your list.

Not only does it provide an energy boost in times of need, it can also help you stay alert and focused during long hours spent in your bunker. Plus, coffee has a long shelf life—just make sure to store it in an airtight container in a cool, dry place.

Pemmican is a type of preserved meat that was popular among Native American tribes and early settlers alike. It’s made by grinding lean meat into a powder and mixing it with fat or rendered tallow.

This mixture is then formed into small cakes or bars and dried, giving it an incredibly long shelf life—some pemmican recipes can last for years! Pemmican is calorie-dense and relatively lightweight, making it perfect for storing in a doomsday bunker.

Here’s how to make it.

Honey has been used as a natural sweetener since ancient times, and its antibacterial properties make it ideal for treating wounds. It also has an incredibly long shelf life.

Plus, honey is calorie-dense and filled with vitamins and minerals that will help keep you feeling energized during tough times in your bunker.

Peanut butter may not seem like the most practical choice for stockpiling food for a doomsday bunker, but don’t underestimate its usefulness.

Peanut butter is packed with protein and healthy fats that will help keep you energized during tough times—plus, its creamy texture makes it easy to spread on crackers or toast without much effort.

And because peanut butter doesn’t require refrigeration after opening (if stored correctly), you don’t have to worry about wasting precious energy keeping it cold.

Another great option is freeze-dried foods. Freeze-dried fruits and vegetables last longer than their fresh counterparts and retain much of their flavor, texture, and nutritional value.

Plus, freeze-dried foods take up less space and are lightweight—perfect for packing into a bunker or other disaster shelter that may be short on storage space.

Hard cheese is an excellent source of protein and calcium. It also lasts much longer than other types of cheese because it is sealed in wax which prevents it from going bad quickly. It also tastes great and can be eaten alone or added to recipes like macaroni and cheese or lasagna.

Canned fruits and vegetables are a great way to get essential vitamins and minerals into your diet while in the bunker. Canned fruits can provide vital nutrients like Vitamin A, Vitamin C, potassium, magnesium, iron, and dietary fiber while canned vegetables can give you added vitamins as well as antioxidants that help fight off disease.

Powdered milk is a great way to get all the nutritional benefits of dairy without having to worry about it spoiling quickly. Powdered milk has many of the same benefits as regular milk, including protein, calcium, vitamin D, magnesium, vitamin B-12, phosphorus and zinc.

Plus, it doesn’t need refrigeration until it has been reconstituted with water, so it will last much longer than regular milk in your bunker.

White vinegar is an excellent ingredient for preserving food as well as being a great substitute for many different types of cooking oils due to its low acidity level. It has antibacterial properties, which makes it perfect for cleaning surfaces or dishes as well as giving foods like pickles their delicious sour flavor.

Canned meats and fish can provide essential proteins while inside the bunker without having to worry about them spoiling quickly as fresh meats would.

Canned meats such as tuna or salmon are high in omega-3 fatty acids, which are important for brain health while canned chicken provides lean proteins that help build muscle mass and keep energy levels up during long days inside the bunker.

Alcohol can be used both medically, as a disinfectant – and recreationally, as a way to keep morale high during stressful times in the bunker. Even better, unopened liquor has an indefinite shelf life.

Candy is another great option for your doomsday bunker because it doesn’t require refrigeration and it tastes delicious! Plus, candy contains enough sugar to give you energy when you need it most.

However, since candy is not particularly nutritious, try pairing it with other foods from your bunker such as nuts or dried fruit as part of a balanced diet.

Jerky is an excellent source of protein and makes for great snacks on-the-go since it’s light and easy to carry around. There are many different types of jerky available such as beef jerky or turkey jerky – whatever your preference may be!

Dehydrated meat has an extremely long shelf life so you don’t have to worry about eating spoiled meat while waiting out a crisis in your doomsday bunker.

Protein powders and supplements are another must-have for your bunker stockpile. Protein powders provide quick energy when mixed with water or milk alternatives such as almond or coconut milk. They can also be used to add protein to smoothies or baked goods in a pinch.

Additionally, look for vitamin supplements that contain essential vitamins and minerals such as Vitamin C, Vitamin D3, iron, zinc, magnesium, calcium etc., which can help you stay healthy during an emergency situation when access to fresh fruits and vegetables may be limited or nonexistent.

Nothing says comfort food like a steaming bowl of soup. Canned soup is an easy go-to for any bunker dweller because it lasts so long. Canned soups often come with a “use by” date several years away, making them ideal for emergency scenarios and long-term storage.

Additionally, canned soups are generally high in calories and protein, so they make a great meal when paired with other items from your bunker.

Hardtack is an old-school staple that can be stored for up to 25 years or more without refrigeration or preservatives. It’s cheap, filling, and packed with essential nutrients like carbohydrates and calcium.

Hardtack can be eaten alone as a snack or used as an ingredient in recipes such as stews or soups. Just make sure to store hardtack in airtight containers away from rodents or bugs.

Here’s how to make it.

What Foods to Avoid in Your Bunker

Anything That Requires Cooking

When it comes to food in your bunker, it’s best to stick with items that don’t require any cooking. This means avoiding items like pasta, beans, and rice as they will require boiling water and other forms of heat before they can be eaten.

There’s nothing wrong with including these foods in your stockpile – which is why we listed them in our round-up above. However, you need to keep in mind that if you have limited space, it’s best to focus on foods that don’t require cooking instead.

Focus on other non-perishable foods like nuts, dried fruit, and jerky, which don’t require any form of cooking to enjoy and will, therefore, give you the biggest bang for your buck.

Obviously, perishable items such as meats and dairy products should never be put in your bunker unless you plan on having a refrigerator or cooler with dry ice present inside the bunker.

Even then, the shelf life is still limited, so these shouldn’t be relied upon for long-term storage, especially if there is no power source available in the bunker.

How to Store Food in Your Doomsday Bunker

Whether you are a prepper or just want to be prepared for any eventuality, having food stored is an essential part of your survival plan. But how do you store food in your doomsday bunker? Below, we’ll show you the best practices for food storage so that your stockpile will last for years to come.

The first step in building your food storage is choosing the right food supplies. You’ll want to choose foods that have a long shelf-life and won’t easily spoil.

Canned foods, root vegetables, and grains are all good choices. Make sure you choose foods that you like as well; eating something you don’t enjoy during a time of crisis can make it even harder to survive.

Once you have chosen the right food supplies, it’s important to properly store them in your doomsday bunker.

Make sure they are stored away from direct sunlight and other sources of heat, as these can cause the food to spoil faster. Also, make sure there is enough air circulation around the cans and other containers being used for storage.

Finally, make sure all cans and packages are sealed tightly, so no air gets inside and causes mold or bacteria growth on the food items.

You also need to regularly rotate your supplies by consuming older items before newer ones. This ensures that none of your stockpiled items expire before they can be consumed and helps prevent waste from occurring when items go bad before they can be used up.

To help with this task, label each container with a date indicating when it was placed into storage so you know which ones should be consumed first.

When preparing for the worst-case scenarios, it pays to plan ahead—especially when it comes to food!

By stocking up on non-perishables such as canned beans and lentils, freeze-dried fruits & vegetables, protein powders & supplements, you will ensure that you have enough nutritious food available should an emergency arise. So get ready – because you never know what tomorrow may bring. 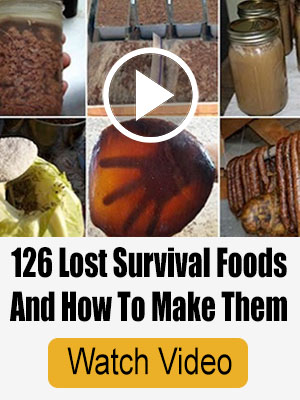