You are here: Home / Skills / How to Build a Fire in the Snow
This post may contain affiliate links.* As an Amazon Associate I earn from qualifying purchases. Click here to read our affiliate policy.

It’s easy to get caught in the mistake of imagining a bug out like a camping trip; the weather is fine and we’re enjoying out time in the woods. Of course, there’s just one problem with that scenario: It’s totally unrealistic. If we’re bugging out or even caught in a survival situation, chances are that the weather is going to be bad…really bad.

Probably the worst time of year for bugging out and trying to survive is wintertime. Hypothermia is still the biggest killer in the wild and the chances for hypothermia increase in the wintertime. That alone should be enough to give us pause and make us think twice before bugging out. But if we decide we have to, we’d better be ready to deal with the cold.

Besides being properly dressed, that basically boils down to the two things that are necessary for setting up camp: building a shelter and starting a fire. Both require considerable physical activity; so, it’s important to give yourself enough time to complete them. You don’t want to work too hard or too fast, as that will cause you to perspire, increasing the chances for hypothermia.

The first step in building a fire in the snow is to find the right spot for the fire. Obviously, this is going to have a lot to do with where you set up camp, as well as where you set up your shelter in the camp. Even so, the fire itself has a few important considerations that must be taken into account, so that you don’t lose your fire to the snow.

As we all know, snow is frozen water. All it takes to turn it into liquid water is a little heat. That means your fire could conspire to put itself out, if it melts the snow. Care must be taken to ensure that’s not going to happen.

To start with, check to see that you’re not building your fire in a low spot. While it is common to look for a hollow to build the fire in, so as to protect it from the wind, this is a big mistake in the snow. When the heat from the fire melts the snow, the resulting water can run down into that hollow, putting out the fire. Oops.

It can be very helpful to build a bed from rocks, rather than just a fire ring out of rocks. This will raise your coals up off the ground, so as to protect them if any water does run into your fire. Another good protection is to dig a small drainage trench around the fire pit, giving the water someplace to go, besides right into your fire.

The other consideration is protecting the fire from wind and snow. Falling snow can put out a fire, if it is snowing heavily enough. That snow will turn to water as it reaches the fire, so it might as well be rain.

Some sort of overhead cover, like overhanging tree branches or an overhanging embankment is necessary to keep the snow out of your fire. Watch out for overhanging branches which are laden with snow, as the rising heat from the fire could melt the snow just enough to fall off and land on the fire, smothering it.

Wind can be as much of a problem as snow. You’re going to want to build your shelter so that its back is to the wind, so it should provide some shelter from that wind. But it may be necessary to build up some sort of windbreak, either out of rocks or branches, if the wind comes around the shelter and can reach the fire.

While you’re building windbreaks, consider building a heat reflector behind the fire, so that you can get more benefit out of the heat your fire is producing. This needs to be as close to the fire as possible, while still being far enough away to keep it from catching fire itself.

Finding Fuel for the Fire

Snow, like rain, will tend to make a lot of the available firewood wet. It might not seem wet, because of the water being frozen; but as soon as that water thaws, you’ve got wet wood.

The key here is to gather your firewood from the same sorts of places you would use, if you were trying to start a fire in the rain. Avoid any wood with snow sitting on it and look for wood that is hidden from the snow. Some ideal places include:

Cutting live trees or branches from live trees is a possibility as well, since the sap will have run down into the roots of the tree. While the wood of the tree won’t be as dry as it should be for a fire, it will be drier than deadwood, sitting on the ground, which has soaked up moisture from thawing snow.

Keep in mind that you will likely go through more firewood in the wintertime than you would go through at other times, so gather plenty. If all you can get is pine, then you need even more firewood because pine burns rapidly. It’s great for starting fires, but not so good for the long haul. You’re better off with hardwoods, once you get the fire started, if you can find them.

The hardest thing to find in the snow is good tinder to start your fire with. This is at least part of why our ancestors would carry a “tinder box” when they traveled. In addition to a flint and steel to start their fire with, they would keep tinder in that, which they found along the way, always ensuring that they had a good supply of tinder to get fires going.

There are various types of tinder you can make or gather to make your own tinder box. But considering we’re talking about starting a fire for survival, I’d prefer to stack the deck in our favor.

Rather than depend on char cloth or some other simple tinder material, this is one of the few times when I would want something that contains a chemical accelerant to get the fire going. You can either buy commercial “fire starters” made for this or make your own.

Two of the most common homemade fire accelerants are dryer lint, covered in wax and cotton balls soaked in petroleum jelly. My favorite is the cotton balls, as they are easy to ignite and will burn hot enough to start a fire for at least three minutes. That’s enough time to ensure that the kindling is dry, as well as ignite it.

You can easily make your own petroleum jelly and cotton ball fire starters. Just place a cotton ball in a bowl and scoop about a teaspoon of petroleum jelly out of the jar. It’s best to scoop with the back side of the spoon, as that’s the side you’re going to need to use.

It shouldn’t take more than one of these fire starters to get a fire going, assuming that you’ve got the fire laid properly and the flame from the fire starter can reach the kindling. Once your fire is established, all it will need is to be fed fuel to keep going. 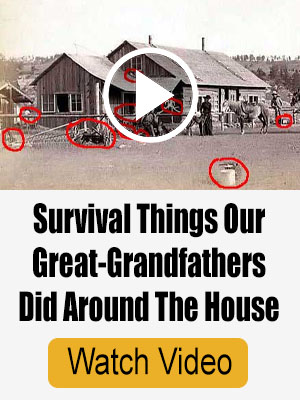