You are here: Home / Survival / How Far Away Must You Be to Survive a Nuclear Explosion?
This post may contain affiliate links.* As an Amazon Associate I earn from qualifying purchases. Click here to read our affiliate policy.

We are closer to a nuclear war than we’ve ever been. In fact, the prospect of all-out nuclear world war was not an option during the last world war. We beat the Germans to the nuke, and thank God for that.

Today, there are 9 countries that possess nuclear weapons. Over half of them do not get along with each other. India and Pakistan have issues. China and India tend to have issues. China, Russia, and the US all have issues with one another. North Korea wakes up mad at everyone but China.

Not to mention that Iran is on the path to becoming the 10th on the list, and many experts believe their first order of business would be to nuke Israel. Israel is also a nuclear capable nation.

It’s safe to say that nearly every country that has nuclear weapons is getting closer and closer to the biggest decision for humanity. So, the question many people has is: How far away must you be to survive a nuclear explosion?

The Power of a Nuclear Blast

The power and range of a nuclear blast has a lot to do with the type of weapon being used. There are massive nuclear weapons out there that can do tremendous damage and spread for miles and miles.

There are smaller nukes that are still incredibly deadly but cover a much smaller area. Some talk has been had about tactical nukes or battlefield nukes. These can range from a fraction of a kiloton to 50 kilotons.

The largest nuke that America has ever detonated was called Castle Bravo, and that was a 15 MEGA ton nuclear weapon. So, the distance you have to be from a nuclear weapon can vary WILDLY based on the type of weapon.

The most common ICBM used by China are called the Dong Feng-5 and these have a 5 megaton yield. This is about 20 mile radius of light destruction and the further into that radius you go, the worse the effects.

The Effects of a Nuclear Blast

If you were standing 20 miles away from the bomb dropped on Hiroshima and you had your back turned to the blast with your arm over your face and your eyes closed, the light would be so bright you could see the bones in your arm!

After the flash of light comes the fireball. This basically incinerates everything in the vicinity. We like to think of nukes as massive explosions that do incredible damage, and they do, but at the heart of a blast is a massive fireball that scorches everything.

Of course, the kinetic energy from a bomb like this travels far and devastates everything in its way.

Kinetic energy is the farthest-reaching effect of the nuclear bomb, but radiation, depending on the bomb, can reach very far, too. It can be deadly if you do not have shielding to protect you from it. The good news is things like dirt, stone, brick, water, cement block, and even layers of things like mattresses, pillows, and blankets can be used as shielding.

Though the latter are not as effective as the former, they are still something, and at the center of your home, it could be enough to keep you safe.

The basics of radiation safety are: Time, Distance, Shielding. So, you don’t want to be in a radiated zone for long. You want to put distance between you and the radiation, and if none of that is possible, you need shielding.

All the other effects of a nuclear weapon will be affected by your location, too. Underground, the radiation will have a much harder time penetrating. The light and any fallout will be better blocked if you are underground, too.

Having a planned location for a nuclear strike is a very important part of nuclear preparedness. The average basement can be very effective in most cases. Of course, in a direct strike, the basement will not protect you. However, if you are in the outer ring of light destruction, you should be fine.

While fallout is terrifying, it might not be as big of a problem as you think. Dave Jones the NBC Guy is a host at The Prepper Broadcasting Network. He spent 20 years teaching soldiers about nuclear, biological, and chemical warfare.

According to him, the desired use of a nuclear weapon is an airburst because that creates the most casualties. Detonating a weapon on the surface means the earth below the explosion eats a large chunk of the kinetic energy of the blast. It’s a waste!

When he did the calculations for a nuclear blast, they wouldn’t even factor in fallout for an airburst! So, if militaries are volleying warheads, fallout is not going to cover the earth. It will likely be the least of your worries.

This is probably the simplest way to understand how your location will be affected by a nuclear blast. Nukemap is an amazing tool that allows you to choose any point on a map and view the effects of a variety of nuclear bombs.

You can detonate a bomb on the largest city near your home and see how large the fireball would be and even how far out the radiation would travel.

Visit nukemap.org/nukemap and see what it would look like if you detonated a Russian nuclear bomb close to your home. This will answer the question for you right off the bat. It is a great simulator, and while it cannot be 100% accurate, if you are close to the edge of the blast effects, I think it is safe to say you are in serious danger where you live.

The short answer is that you need to be as far away from a nuclear blast as possible. That means living far away from nuclear targets, having a plan to get away from these targets, or it might even mean having a pre-built nuclear shelter so that you can survive things like radiation and the kinetic blast of the bomb.

Most modern ICBMs are going to yield between 4-9 megatons of destructive force. These are the most likely nuclear weapons to be used on the US by nations like China and Russia. That means there will be a 20-25 mile radius of light destruction getting worse the further towards ground zero you go. 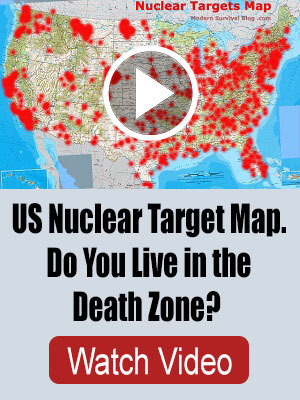