You are here: Home / Supplies / 12 Places To Hide Your Survival Supplies During Martial Law
This post may contain affiliate links.* As an Amazon Associate I earn from qualifying purchases. Click here to read our affiliate policy.

If and when the government declares martial law after a disaster, it will be under the pretense of safety and security for the general public. And I’m sure that for many authorities, that will be their sole intention.

However, if the disaster is something that causes severe food and water shortages, the government could start confiscating supplies from “hoarders.” They will demonize people who have stockpiled lots of food and call them “selfish” or “unpatriotic.” They could even go door to door looking for hidden food stockpiles.

If your emergency supplies are easy to find (in the pantry, closet, or cabinets), consider moving them to some harder-to-find locations. Not only will you keep your supplies safe from the government, but you’ll also make it harder for burglars and looters to find them.

Granted, if they search your home for long enough, they will likely find your food eventually. However, since they will have countless homes to search, they’ll probably move on after searching all the most obvious locations. As long as you don’t make them suspicious, they won’t waste time turning your entire home inside out.

Where to Hide Your Supplies

If you have stacks of cardboard boxes filled with random items (clothes, documents, holiday decorations, etc.), then you can easily hide food, water, first aid supplies, and ammunition among all of it. Even if the authorities find some of it, they may not find all of it.

If you still have the original boxes for your appliances or electronics, use those too. Empty out the styrofoam or anything else inside and replace it with supplies. You could even go a step further and hide food inside old appliances and electronics.

For example, if you have an old box-style TV, hollow it out and put supplies in it. After the SHTF, no one is going to be interested in your old TV, especially if there’s no power. Look around for other obsolete devices you never use.

If your home has a crawl space, you could create a trap door in the floor. The authorities might think to look here, but if the door is well-hidden and blends into the surrounding floor, there’s a decent chance that they won’t notice it.

3. Above The Door Frame

This won’t work for all doors, but it will work very well for doors in closets. Simply put a magnetic gun holder or safe above the door frame inside a closet.

Then, you can attach firearms to the holder. It’s not likely that the searchers, in their haste to search as many houses as they can, will even think to look there.

There are many ways to do this. You could install some fake electric outlets and hide small items like jewelry or wads of cash behind them. Or you could cut a hiding place into the wall behind a large painting.

Another idea is to make a hiding spot behind a piece of trim. Watch the video below to see how easy this is.

If you’re a handy person, you could create hidden drawers and compartments on the underside of coffee tables and end tables. Or you could remove couch cushions, carefully remove the fabric, hide supplies inside the couch, then sew the fabric back into place.

You could also hide things inside your box spring. Carefully cut through the fabric along the edge of the box spring, place supplies inside it, then reattach the fabric. Most burglars and authorities would never think to look inside a box spring.

If all of this sounds like too much work, check out CovertFurniture.com. They specialize in making furniture with secret compartments, although they can be kind of expensive.

When looking around your house for a place to hide your supplies, don’t just look for hiding places. Look at what’s in front of you and think about how to turn it into a hiding place. For example, if you have a large lamp with a lot of empty space inside, you could line the inside with a bag and fill it with rice.

And remember my idea about hiding supplies in your couch? Well, don’t forget about the cushions. Just cut them open, along with any decorative pillows you have, hide your items inside of them, and sew them shut again. Just be careful that you keep the sewn side of the cushions hidden and out of view.

Or if you have any potted plants, you could put a waterproof bag or container at the bottom beneath the dirt.

No matter where you live, there is extra space beneath floor cabinets. All you have to do is remove the front panel and slide your supplies under the cabinets. Here’s a video showing how.

Here’s an idea. Next time you have an empty bottle of bleach, shampoo, dish detergent, or any other solid-colored bottle, don’t throw it away. Instead, clean and rinse it out thoroughly, and stuff some Mylar bags of food inside.

To do this, you may have to cut off the top or bottom of the bottle, then superglue it back into place when you’re done. Few people would look twice at some old bottles of cleaning supplies underneath the sink.

This may sound ridiculous, but you can indeed hide items in your cat’s litter box (of course, you’ll need to own a cat for this to work). The idea is that you can wrap items in plastic bags and then store them underneath the litter. How would the authorities possibly think to look there?

To keep things more pleasant, consider having two cat boxes but only one cat box that you actually allow your cat to use. Keep the other box closed off from the cat so it won’t do its business in there (and potentially ruin whatever you have stored).

11. In A Survival Cache Away From Home

Another option, of course, would be to bury your supplies away from home. This is a common tactic used by preppers for bugging out: the idea is you can hide supplies en route to your bug out location so you can resupply along the way.

Of course, your mobility is going to be restricted by martial law, and you more than likely will not be allowed to leave the city. But still, it’s something to consider. Examples of places in town where you can hide items could include a public park, an abandoned building, off the side of hiking trails not too far from town, and so on.

Here’s a guide to survival caches and what to put in them.

12. Buried In Your Backyard

If you have a garden, that could be a great place to bury some supplies (not so much that there’s no room for roots). Make use of PVC pipes, pelican cases, metal ammo cans, and food-grade plastic containers, as long as they’re 100% waterproof.

Of course, there are plenty of other hiding places. Really, the only limit is your imagination. You just have to change your mindset. Instead of looking for hiding places, look at what’s in front of you and think about how to turn them into hiding places.

Here are some other articles with more ideas:

There is more to protecting your survival supplies than simply hiding them. There are several other things you can do to throw authorities off the scent or convince them you don’t have anything worth taking. Here are a few ideas.

If the authorities really do decide to confiscate guns, food, and other supplies during martial law, then when they come to your door they aren’t going to be satisfied until they take at least some items from you.

That’s why you need to have decoys set up to make them happy. Buy a really cheap gun or two that you are more than willing to give up, and have food and some other supplies that they will seize to make them happy before they move on to the next home.

Ghost guns have become a rather controversial topic in our political discourse because there’s simply no way of tracking them. But this is exactly why they will be of much value during martial law.

For example, did you know that if you buy aftermarket Glock parts (such as a Brownells slide with a Polymer 80 frame) and put them together, there are no serial numbers and you can have those parts shipped directly to your home without going through an FFL dealer?

There’s simply no remote way that the government could track that. You can do similar things with other types of firearms such as AR-15’s as well. 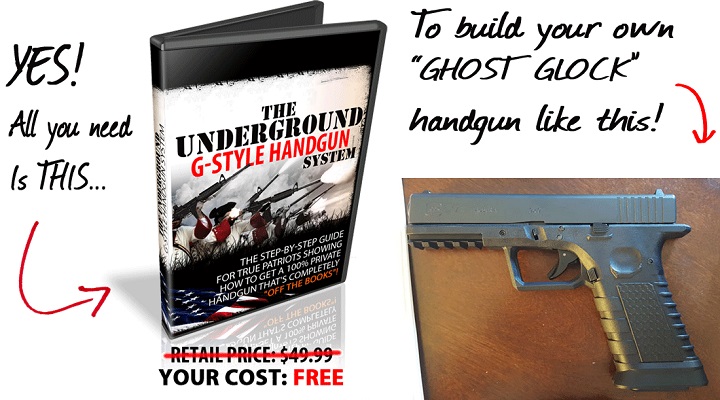 When the authorities barge down your door and begin searching your house, here’s a trick you can use in conjunction with the above strategy of having decoys: act like you’re desperate.

So when they confiscate your decoy firearms, act desperate say things like, “How can you take those? How am I supposed to protect my family now that I’m unarmed?”

All the same, when they go after your food say the same sort of things: “How am I supposed to feed my family now? That’s all we have and the stores are all closed!”

Obviously, you don’t want to complain too much or get violent lest they decide to arrest you. Just try to come off as somebody who has very little left. You really need to put the desperation in the tone of your voice.

Report That Your Items Were Stolen

You can also report that many of your items were already stolen by burglars and looters, or taken by the authorities previously.

If the authorities have a registry of firearms owners in the area and know exactly which guns you own (they knew this information about gun owners during Hurricane Katrina back in 2005), then you can report your firearms stolen to the authorities right before martial law has taken place.

There are many more places you can hide your valuables during martial law. All you have to do is unlock the creative side of your brain. But the authorities will be likely to overlook most of the above places and ideas, so those will be a good place to start.