You are here: Home / Survival / 15 Medicinal Herbs for Natural Pain Relief
This post may contain affiliate links.* As an Amazon Associate I earn from qualifying purchases. Click here to read our affiliate policy.
33.5k
SHARES
PinShareTweetPrint

Disclaimer: I am not a medical doctor and nothing in this article should be taken as medical advice. Please talk to your doctor before using any of the herbs and/or remedies mentioned in this article.

Although I think it’s a good idea to stock up on OTC medicines, that doesn’t mean you shouldn’t have any natural medicines as well. OTC medicine has an expiration date, but you can grow fresh medicinal herbs year after year, making them a great option for people who want to live off the grid or at least be a little more self-sufficient.

One type of medication that people will miss more than any other in a grid-down scenario is painkillers, so pain relief is going to be the main focus of this list. You won’t find anything as strong as Vicodin below, but if nothing else these herbs can make the pain more tolerable.

Here, then, are 15 medicinal herbs that are natural painkillers.

This beautiful mountain plant is highly recommended for the treatment of bruises and general inflammation. While some companies sell arnica pills for consumption, home harvested arnica should only be used topically.

Arnica works best on closed injuries, such as bruises and sprains. Harvest arnica flowers at their prime, and macerate the in oil. Combine arnica oil with St. John`s Wort and Balm of Gilead for an awesome pain relieving concoction.

This is made from the buds of the cottonwood tree, macerated in oil. Normally used as a topical salve, Balm of Gilead is effective at relieving pain from bruises, sprains, burns, sunburns, and other injuries. It can also speed the healing of fractured bones if used in conjunction with “Bone Set” (aka Comfrey).

Balm of Gilead, if extracted in an alcohol base, can be taken internally. However, it is most commonly used on external wounds and injuries.

To make Balm of Gilead, harvest the buds sometime between late winter and early spring, just as the sap begins to run. If you pinch the buds and see orangish resin inside, it’s time to gather them. Once you’ve filled up half a mason jar, it’s time to make the balm. Here are detailed instructions.

These two beautiful plants have the same soothing effect, though like mint they can have an excitatory effect on certain people. Chamomile works well with St. John`s Wort to reduce pain and induce sleep.

Both Chamomile and Oxeye Daisy should have the flowers harvested and dried, with newly opened flowers being the most potent. After drying, the flowers can be added to tea.

Cloves are most commonly used as additions in a variety of meals, including pies and meat-based dishes. However, simple ground cloves serve a critical role for medicinal purposes as well.

Studies have found that cloves can be used to help treat the common cold, reduce feelings of nausea, and relieve inflammation from arthritis or even in your teeth. You can either consume the cloves directly as an herbal supplement, or you can take them as an essential oil.

Furthermore, you can use cloves as a topical pain reliever as well. If you develop any fungal issues or light open wounds such as scrapes, you can apply cloves directly to the affected site to help reduce the pain.

Another herb that can help to reduce inflammation is echinacea. Studies have shown that participants with osteoarthritis who took supplements containing strong levels of echinacea experience significantly reduced swelling and inflammation (as well as reduced pain).

Studies are also being conducted to determine echinacea’s effectiveness on upper respiratory issues, such as difficulty with breathing.

Feverfew has been used as a remedy for headaches for literally centuries, and it’s a common ingredient in medicine used to treat migraines as well.

Additionally, feverfew can be used to reduce inflammation. While there need to be more studies conducted on this, feverfew is used by many to help reduce pain from rheumatoid arthritis or even toothaches.

Take note that feverfew is known to have a few potential side effects, such as irritation to the skin or the lips, so use it with caution (especially if you will be consuming it directly).

This has the same properties as turmeric, and while you can easily access its benefits by cooking with it, Ginger has the added benefit of being a delicious candy.

The berries, bark, and flowers of this tree are effective at relieving cramps caused by women`s complaints. It can also help with other cramps, though it is less effective. Berries or flowers can be dried and used as a tea. The bark can also be used in tea, or turned into a tincture if you want.

For tea, generally half a tsp. of Hawthorn to a tsp. and a half of other herbs (like peppermint and marshmallow) are used.

These hot spicy fiends are actually your allies in the fight against pain. Hot Peppers, or the capsaicin within them, are an effective pain reliever, analgesic, and general anti-inflammatory agent. Consume hot peppers in food to access some of their benefits.

Topical capsaicin ointments can also help relieve inflammation from sprains, chronic arthritis, and other inflammatory pain issues. The consumption of hot peppers can also act as a mood booster.

When used topically, lavender oil–or just a lavender frond rubbed on the skin–will relieve pain from burns, insect bites, and stings. To use, either apply lavender oil, or rub a sprig of lavender directly on the bite, burn, or sting.

Within a few moments, the pain should lessen and within five to ten minutes it should be totally gone from most mild burns, wasp stings, or insect bites. A hornet sting is the only sting that may need more treatment than straight lavender to relieve. Spider bites are also likely to need more care depending on the type of spider.

This herb is a sweet herb, and can enhance the benefits of some of the bitter pain-relieving herbs. It can also act as a soother, and can help reduce heat-related inflammation due to its cooling properties. However, for some people mint is an exciter rather than a soother.

Observation is always necessary when utilizing natural herbs. Mint should be harvested in its prime, just before the flowers begin to appear. Then it should be dried and kept in a cool, dark, and dry place until needed to blend with other herbs for tea, or just for tea on its own.

Rosemary has traditionally been used to heal a variety of ailments as an essential oil. In its original form, rosemary is an evergreen herb that thrives in Mediterranean-like environments. It’s in the same family as basil, lavender, and oregano.

Rosemary can be used to help relieve pain from headaches, reduce muscle and even bone pain, and relax your muscles in general. The best way to use rosemary is to dilute it as an essential oil into olive oil or another type of carrier oil. Pain receptors in your brain will respond to it, which will then serve to help reduce pain and inflammation throughout your body.

This plant, an inhabitant of woods, hillsides, and roadways, is sometimes considered an invasive species. It’s about knee to waist-high and covered in yellow flowers, which are at their brightest in mid-summer. Besides being very pretty, it’s also a potent pain reliever.

This plant targets nerve pain, and can actually encourage healing in damaged nerves. To get the full benefit of this plant, harvest the flowers when they’re at their prime and macerate them in alcohol or olive oil. An alcohol tincture (you can use glycerin as an alternative) can be taken internally, while an oil tincture can be used externally.

St. John’s Wort is also an anti-depressant and can help with Seasonal Affective Disorder if taken daily. A therapeutic dose is approximately 1 tbsp of tincture in half a glass of water every night. Externally it will help heal bruises, sprains, and scrapes, particularly when combined with other pain relieving herbs.

Willow is a surprisingly effective pain reliever, with the bark containing the highest concentration of the pain relieving compound. The chemical in aspirin was actually synthesized after analyzing willow, since willow contains the same compound as aspirin, it also acts as a mild blood thinner. Thus willow should not be combined with commercial pain medications, and anyone who is sensitive to aspirin should not take it.

Willow bark can be harvested and dried at any time. To access its pain-relieving properties, brew a mild tea of willow, and combine it with peppermint or another sweet herb to mask the bitterness. 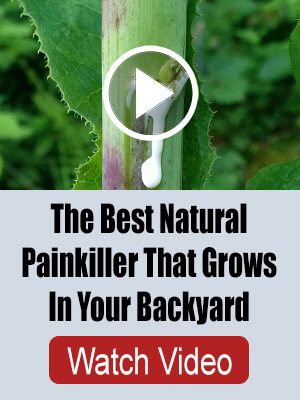